Surrey Schoolboy Trials Club was established in 1972 by Trials riders Keith Dopson, Rag Sutton and Bill Boniface whose sons wanted to ride but were too young to enter in adult events. In 1974 the club joined the A.C.U (Auto Cycle Union) and since then has always run under their auspices with the aim of giving young riders training and competition in off road motorcycling. 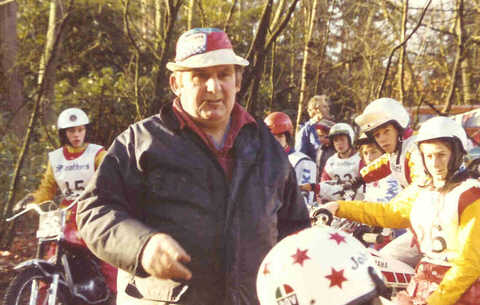 The Late Keith Dopson at the first Trial in 1972

Later on other lads wanted to have a go at Trials Riding but, although their families could buy the bike and clothing, they had no knowledge of actual riding themselves. It was decided that before any new members could take part in a Trial they had to go to a training area until they were able to ride their bikes safely. In 1975 the Pit Stop Youth Scramble Club offered to share a piece of land at Lyne, Thorpe, which was used for this purpose.

In 1978 Runnymede Councillors Geoff Tollett and Roy Elliott each donated a shield to the Club which was to be awarded to the best rider over a period of six months. These are still used today and the Championships are run at the Saturday Trials.